The Coat of Arms of Bishop Charles Drennan

Ecclesiastical heraldry is a type of identification of individuals, dioceses or institutions. The insignia together with the chosen emblems and the motto are a symbolic form of narrative.  In regard to a Bishop, they can express something of his family history, his spirituality, the region where he has been called to serve, and the Pope who has appointed him. 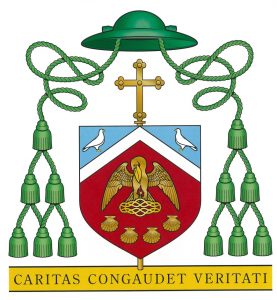 Bishop Charles’ motto caritas congaudet veritati  (love delights in the truth) is taken from the First Letter of St Paul to the Corinthians, chapter 13.  Saint Paul’s insight can be considered the kernel of Blessed Antonio Rosmini’s (founder of the Institute of Charity to which Bishop Charles belongs as an Ascribed member) entire contribution to the dialogue between faith and reason.  It also stands at the heart of the ‘new evangelization’ in which all the baptized of Aotearoa-New Zealand are called to participate as we further the mission of the universal Church in our own secular society.