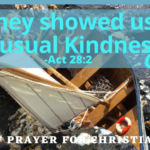 The Week of Prayer for Christian Unity is celebrated in New Zealand between Ascension and Pentecost Sundays each year (25-31 May this year).

The Week of Prayer began as a Catholic observance in 1908. In the 1920s other Christian churches began their own observance of a period of prayer for unity. In 1968 for the first time the World Council of Churches and the Pontifical Council for the Promotion of Christian Unity jointly prepare the materials for the Week, a practice which has continued ever since.

Each year the Christian churches in a different part of the world are invited to work together on the materials. The resources are then adapted in each country for their own use, with the Catholic Bishops Committee for Ecumenism adapting the resources for use in Aotearoa New Zealand.

The materials for the 2020 Week of Prayer were prepared by the Christian churches in Malta. This year’s theme “they showed us unusual kindness” (Acts 28.2) refers to the shipwreck of St Paul and his companions on the island of Malta, when he was being taken to Rome as a prisoner. The inhabitants of Malta showed “unusual kindness” to those who were shipwrecked in a violent storm. The theme has particular relevance for our current situation, as Cardinal John Dew says in his letter for the Week of Prayer:

“There is much to reflect upon in this theme in the light of our experience of the last few weeks with COVID-19. We have been urged to ‘be kind’ and to ‘stay united’. The pandemic has been the equivalent of a shipwreck for many people, and ‘unusual kindness’ is needed as never before.”

A Pastoral Letter from our bishops on returning to Mass and 'Leaving the Closed Room' [..]

Some parish activities to resume, but mass still unavailable [..]

Deacon Trung Nguyen was due to be ordained for the Palmerston North diocese on April 18 [..]

I am the gate. Whoever enters through me will be saved and will come in and go out and find pasture [..]