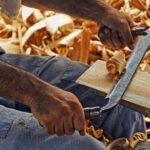 A reflection by Msgr Gerard Burns for the feast of St Joseph the Worker.

At this moment of disruption to local and world systems of trade, work, livelihoods and finances we come to 1 May (May Day), a date significant in the world of work (May Day) and in the life of the Church as the feast of St Joseph the Worker.

In ancient and medieval Europe 1 May was marked as a spring festival, a renewal of life as plants and crops begin to flower after winter. In the development of modern industrial capitalism it became a day to mark the importance of the worker and his/her family in the process of production. Labour’s May Day originates in significant industrial action in Chicago in 1887.

Early industrial capitalism was noted for long working hours, child and sweated labour, poor pay and conditions. The idea that a day should be split into 8 hour divisions for human health (work 8, sleep 8, recreate 8) was proposed in early 19th century England by Robert Owen. It was taken up by Samuel Parnell, a carpenter newly arrived in Wellington in 1840.

In the late 19th century organized labour in the USA strongly pushed for the 8 hour day. This culminated in the killing of some workers in Chicago in May 1887, hence May Day as a workers’ day.

In 1955 Pius XII made May 1 the feast of St Joseph the Worker, indicating that the world of work was not foreign to the concerns of the Gospel. Pius the XI had declared Joseph to be a member of the working-class, emphasising his material contribution to his family as well as Jesus being born into the experience of earning a living.

Of course 1955 was the height of the Cold War, and Pius XII was wanting to offer an alternative to what Church officials saw as atheistic and materialistic philosophies of work and life being offered by communist governments and thinkers. However the times have changed and each year this day offers us the chance to look anew at the situation of work and workers.

It wasn’t long after the establishment of May Day in the USA that Leo XIII wrote his famous encyclical Rerum Novarum (issued May 15, 1891) speaking of the rights of workers to organize and the importance of a just wage. In early 20th century Europe Fr Joseph Cardijn started his Young Christian Workers movement to support and train young factory workers about how to ensure a just work-place starting from a faith position.

Quadragesimo Anno of 1931 took up the question of social organization and a just wage as Mussolini started to organize Italy as a fascist state. The late 1940s saw the ‘worker-priest’ movement in France as a way of the official Church being close to the working-class. In the early 1980s in Poland the Solidarity trade union challenged the Polish government in a way that had not happened previously. And in 1981 John Paul II’s encyclical on the dignity of work – Laborens Exercens – was published.

More recently Benedict XVI’s Caritas in Veritate (2009), a reflection following the Global Financial Crash, spoke again of the market economy, solidarity and the international role of trade unions. In recent years Pope Francis has connected frequently to those working in the informal sector (World Meeting of Popular Movements) about Land, Labour and Lodging (Tierra, Trabajo, Techo in Spanish).

Most recently he wrote to this movement and included a reference to the possibility of a universal basic income, something being discussed in various parts of the world including Aotearoa. Will the Covid-19 lockdowns around the world lead to different and/or better working practices: better for workers, families and Papatuānuku, Mother Earth? The answer from Catholic Social Teaching would be: organize for that!

Published in WelCom May 2020

You're invited to a 6 day silent retreat in October [..]

Cathedral of the Holy Spirit

The Cathedral, designed by architect Frederick de Jersey Clere, was opened in 1925 [..]

How did you experience the COVID19 lockdowns? Was it positive, difficult, what happened to you? [..]

At Bible Society, we appreciate the good work the New Zealand Police have done and continue to do [..]