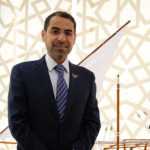 The Document on Human Fraternity, signed by Pope Francis and the Grand Imam of Al-Ashar when they met in Abu Dhabi, the capital of United Arab Emirates (UAE), one year ago, is a blueprint for developing collaboration, dialogue and tolerance between all faiths.

Speaking to WelCom in Wellington, Ambassador Alsuwaidi said the Pope’s historic journey to meet with Sheik Ahmad el-Tayeb of Al Azhar, Egypt, signalled unity and strength in diversity. The Grand Imam returned the visit with a trip to the Vatican in November last year.

‘People hijack Islam, or Christianity, or other religions, but through education, we can create tolerance and understanding,’ said Ambassador Alsuwaidi. ‘Tolerance is a part of Islam and our culture, and all religions at their base include principles of mercy and peace. It is people who stray from these important principles.’

The Document on Human Fraternity for World Peace and Living Together has been widely hailed as a milestone, not only regarding relations between Christianity and Islam, but between all faiths. It is an appeal to put an end to wars and condemns the scourges of terrorism and violence, especially those perpetrated by religious motivations, and to uphold human rights values.

The Ambassador said that it was only through tolerance and understanding that societies can develop stability and peace.

‘For the education system to flourish, for movement of people to advance, and for the economy to grow and prevail, it all depends on society to grow, and each molecule, or building block that strengthens a nation can grow as well.

‘We are very proud Pope Francis and Dr Ahmad Al Tayyeb came together in Abu Dhabi for the ‘Human Fraternity Document’. The significance of this historical visit and the importance placed on inclusion, tolerance, and acceptance shows how much the UAE supports such values. This is why the important meeting was held in the UAE and in the Arabian peninsula for the first time.

‘The presence of Dr Ahmad Al Tayyeb is significant because Al Azhar is in Egypt, the largest Arab populated country and home to a large number of Muslims, as well as Christian minority groups.’

The Ambassador said there had been a long-standing commitment to tolerance and co-existence in the UAE, which is home to more than 200 ethnic groups.

‘One of the UAE’s key priorities with its relationship with other countries and policies is promoting a culture of coexistence and tolerance in the world. The UAE aims to introduce the world to Arab-Islamic civilisation and demonstrate that the UAE is a historical model of diverse races and Islamic societies living in harmony.’

The UAE develops such a culture of co-existence by countering narratives of hate and intolerance, said the Ambassador.

‘The Hedayah Centre, based in Abu Dhabi, serves as an international hub for Countering Violent Extremism by engaging policymakers, practitioners, and researchers, to enhance understanding and share good practices. Similarly, the Sawab Centre works with religious leaders, organisations, businesses, and youth, to amplify their voices and challenge extremist doctrines of hate.

‘The historic visit cultivated the fruits and principles of strength in diversity that were planted a long time ago by the UAE late founder Sheikh Zayed and the UAE’s wise leadership that saw what good foundations of inter-cultural and inter-religious unity can do to prosper into the future.

‘The visit re-affirms such principles for younger generations and allows them to envision a world where we are all one.’

Ambassador Alsuwaidi paid tribute to the way New Zealand had responded to the terrorist attacks on two Islamic mosques during Friday prayer in Christchurch a year ago, killing 51 people.

‘The UAE stands with the Government and people of New Zealand one year on from the tragic attacks. The UAE is proud of the New Zealand leadership and the strong civil positive response where New Zealand stood together in the face of the tragedy and grew united together.

‘New Zealand’s civil society and the Treaty of Waitangi encourages inclusion and unity. We applaud the New Zealand Government and people in their response to Christchurch. The positive robust response of love to an act of hatred illustrates years of understanding and civic-building at all levels, through education, policy-making, and a genuine desire of people to live together in peace, despite differences.’

The example of New Zealand in dealing with such a tragedy is important to contemplate and study, said the Ambassador.

A striking physical manifestation of the Document on Human Fraternity is about to take shape with the building of the historic Abrahamic House of Fraternity in Abu Dhabi, due for completion in 2022. This will be a unique project symbolising religion tolerance by bringing together a mosque, a church and a synagogue in the one location.

Communion to the sick is not able to happen at this time [..]

Fixing our gaze on Christ

Some aids to reflection and prayer in this time of pandemic [..]

How can we truly be on mission and be fully ourselves? [..]