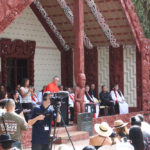 At the Waitangi Treaty Grounds on Waitangi Day, 6 February this year, Cardinal John Dew urged New Zealanders on this day to recommit to protect the beliefs of followers of all religions and of non-religious people.

Bishop Te Kitohi Pikaahu, Vicar-General of the Māori Anglican Church in Aotearoa New Zealand and Coordinator of the Ecumenical Worship invited Cardinal John, as New Zealand’s Catholic Metropolitan Archbishop, to attend the 180th Anniversary of the Signing of Te Tiriti o Waitangi at the Treaty Grounds. Cardinal John was also invited to deliver the homily at the interdenominational church service.

Cardinal John’s message was one of religious tolerance, inclusion and acceptance, and referred to such historic events as Bishop Pompallier, the first Catholic Bishop of Aotearoa New Zealand, seeking and receiving an assurance of religious freedoms for Māori and settler alike from Captain Hobson at the signing of the Treaty in 1840.

Cardinal John recalled the Christchurch mosque’ massacre last March and said New Zealand’s tradition of religious freedom was first affirmed at the signing of the Treaty of Waitangi in 1840.

‘It is religious tolerance, religious inclusion and religious acceptance that is our heritage. I believe it is time to recommit ourselves to protecting the faiths of all who live here: of Māori custom and spirituality, of the different Christian denominations, of Muslims, Jews, Hindus, Sikhs, Buddhists, Bahai’i and many other faiths; and also the freedom of religion and conscience of those who profess no faith’, Cardinal John told the service at Te Whare Rūnanga.

At the signing of the Treaty in 1840, 180 years ago, Bishop Jean Baptiste Pompallier – the first Catholic Bishop of New Zealand – asked the representative of the British Crown, Captain William Hobson, for religious freedom to be respected.

‘It is good we look here to Waitangi, where in these first sacred discussions about the way to live in partnership with each other, my predecessor – my tūpuna in faith – Bishop Pompallier asked for and received a guarantee of religious freedom and protection.

The Hui Aranga or Easter Gathering began in 1946 at Pukekaraka, Ōtaki [..]

‘Manuscript of Māori Conversation’ is one of five new collections on UNESCO register [..]

He Hīkoi Whakapono: A Journey of Faith

We continue with personal stories from some of the ‘People of the River’ [..]