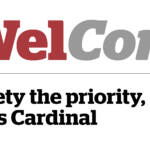 Cardinal John Dew has written to priests and lay pastoral leaders, urging them to relieve the anxiety of parishioners by clearly having precautions in place for their safety.

‘This may involve going beyond the government’s guidelines in some areas, such as by not singing, and requiring the priests and other ministers to be masked,’ the Cardinal wrote in his letter of February 17.

At the current Red Level of the Covid-19 Protection Framework, gatherings of vaccinated people are limited to 100 people. A Mass registration process is in place to manage numbers attending Masses.

The Cardinal goes on to say that if the cases of Omicron in your area ‘rise to a point where you think you need to cancel Masses for safety reasons, or if you contract the virus or need to self-isolate, please remind the people that the dispensation from the Sunday obligation is in place.

‘Also ask them not to try to attend Masses in other parishes as they will be trying to provide for their own people within the 100-person limit.’

The Cardinal writes that while it is important to prepare for Lent and Holy Week, we have to acknowledge that we may not be able to gather for the Easter ceremonies this year, as happened in 2020.

The Cardinal’s letter was accompanied by guidelines for Parish Liturgy Committees preparing for the Easter liturgical celebrations in a Covid environment. Guidelines include a number of adaptations in liturgical practice. These include sprinkling ashes on the head on Ash Wednesday without saying anything, rather than the usual practice of applying ashes to the forehead. On Palm Sunday there are to be no processions. Palms will be blessed in baskets near the altar and collected by the faithful as they depart. There will also be no Washing of the Feet at the Mass of the Lord’s Supper.

The post Safety the priority, says Cardinal first appeared on Archdiocese of Wellington.

A compliment Christians pay to one another

Synodality is about building one another up in the love of Christ. [..]

The final step in the diocesan ‘listening phase’. [..]

We recognise and honour the many and varied contributions of those who have passed. [..]

The windows link to Cullinane College’s legacy and acknowledge its past journey. [..]