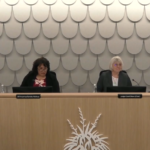 From 15-29 March the Royal Commission of Inquiry into Abuse in Care is holding Phase 2 of its Hearings into redress by faith-based institutions.

The first week of the hearings has focused on evidence about redress processes from witnesses called on behalf of the Anglican Church and the Salvation Army. The second week will focus on the Catholic Church.

Evidence from the Catholic Church representatives will begin on 22 March, with an opening address from me, followed by evidence from Dr Thomas Doyle, canon lawyer (USA). Br Peter Horide (Marist Brothers), Fr Tim Duckworth (Society of Mary) and Virginia Noonan (National Office of Professional Standards) who will present their evidence on 23 and 24 March. On Friday 25 March, Cardinal John Dew will speak on the diocesan approach to redress, the Catholic Church’s national approach to redress, and developments in redress from the Vatican.

These Hearings are livestreamed, and the timetable and livestream may be found on the Royal Commission website’s Faith-based Redress Hearing page.

When the Commission was being established the Catholic Bishops and Congregational Leaders made a submission to the Royal Commission seeking the involvement of faith-based institutions, and the government agreed to this. It is a necessary step in the process of justice, an opportunity to acknowledge our past, examine our failings and to listen to those who have been harmed.

While the Royal Commission process is confronting and difficult, it may encourage other survivors to come forward, perhaps for the first time, to disclose the abuse or harm they suffered.

For more information about the Royal Commission Inquiry see: www.abuseincare.org.nz

The post Royal Commission on Abuse in Care – Faith-based Hearing first appeared on Archdiocese of Wellington.

Donors to Caritas NZ will have their donations multiplied thanks to a new partnership [..]

NZ Catholic bishops strongly urge everyone to get a Covid vaccine [..]

On being an ‘upstander’

The Hem of his Garmet - Men's Retreat

Fr Chris Skinner will be performing at St Bridgid's church on May 23 [..]