Two ‘pre-synod’ hui were held last month – one in the Diocese of Palmerston North and one in the Archdiocese of Wellington – each as the final step in the diocesan ‘listening phase’ of the Pope’s Synod of Synodality, 2021–2023.

A cross section of representatives from the two dioceses met respectively at the Cathedral of the Holy Spirit on Saturday 21 May, and at Our Lady of Kāpiti Church, Saturday 28 May. Both days included prayer, listening and discerning on some of the findings and themes that have resulted from the synodal process carried out in the dioceses over the past eight months. A whakatau began each hui followed by a presentation by Cardinal John Dew about the meaning of synodalilty in the Church today.

Pope Francis has called Catholics worldwide to reflect on and respond to questions about how the Church is ‘journeying together’ in today’s world, while encouraging active listening and discernment among people grounded in the Holy Spirit.

Both hui continued this conversation, with participants invited to journey together and reflect on the meaning of synodality and the opportunity Pope Francis has presented to the people.

At the Palmerston North hui, called ‘Te Reo o Hewa – Our Dreams and Aspirations’, were members of religious orders, diocesan staff, school representatives, ethnic and minority groups, and people on the peripheries.

Common themes from the diocese’s 230 group and individual submissions were presented and explored. They included: things need to change; faith formation; journeying with all; and how we gather. Participants were invited to discuss these themes in the context of the reality of the Church – locally and globally – and the society and times within which the Catholic Church lives today.

General manager Liam Greer said, ‘The day allowed a unique chance to connect with people across the diocese from all walks of life. It was an opportunity to listen, to understand and discuss common themes in the knowledge we all had the overwhelming desire to advance the Church for the benefit of all.’

Local administrator for the diocese Fr Craig Butler said he was particularly taken by the importance placed on listening – really listening – both to one another and the Holy Spirit. ‘While I enjoyed the day, at the same time, I found it deeply challenging. I appreciated people’s honesty and openness in response to the submissions.’

The collated themes presented from the archdiocese were: renewed leadership models; inclusivity; forms of gathering; education and formation; missionary focus; traditions versus change; a listening and learning Church.

The fruits from the two diocesan meetings will be combined with group and individual feedback received over the past eight months and presented later this month in a final summary document from each diocese for the New Zealand Catholic Bishops’ Conference.

The post Pre-Synod hui for Palmerston North and Wellington dioceses first appeared on Archdiocese of Wellington. 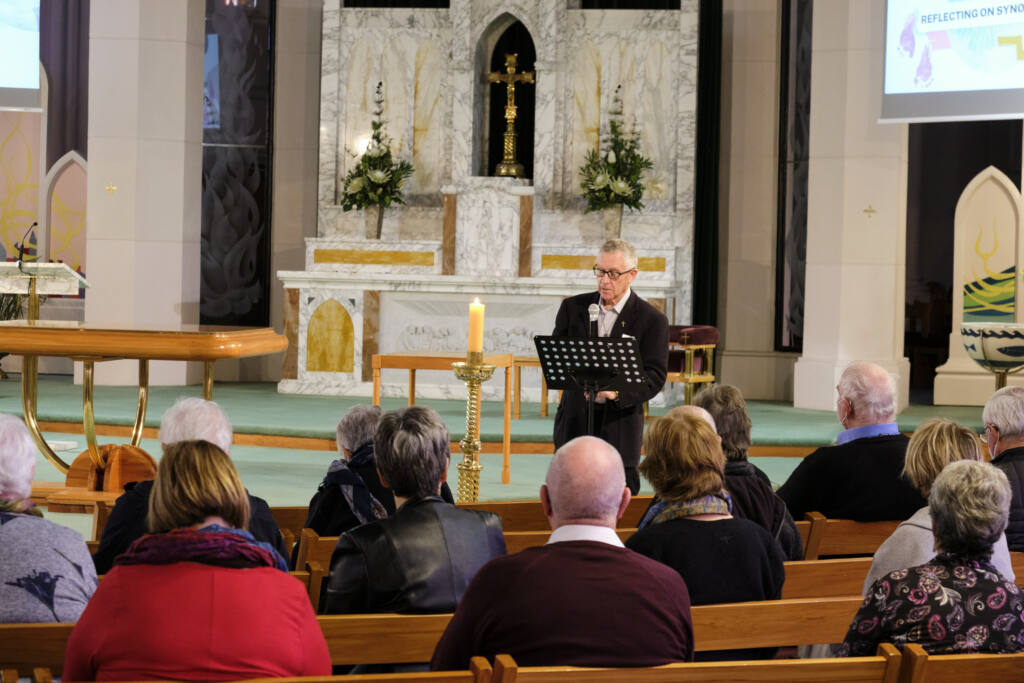 Cardinal John Dew addressed the hui at the Cathedral of the Holy Spirit and spoke about the meaning of synodality and listening – ‘really listening’. Photo: Annette Scullion

The Ministry of Health has six full-time positions dedicated to ‘assisted dying’ but no team dedicat [..]