Pope Francis listens to the voices of young people

Three hundred young people from around the world gathered in Rome for a week-long meeting in March to discuss ‘Young People, the Faith and Vocational Discernment’ as part of preparations for the Synod of Bishops on the same topic in October this year. Their task was to draft a document for inclusion in the Instrumen Laboris given to the Synodal Fathers in preparation for the Synod. 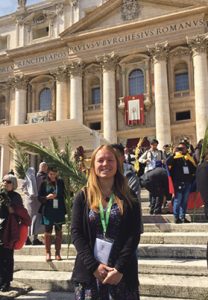 Isabella McCafferty (left), a member of the Family and Young Church Vicariate for the Wellington Archdiocese, attended at the invitation of the New Zealand Catholic Bishops to represent this country’s Catholic young people.

Participants came from around the world representing movements within the Church, Catholic education, different faiths and non-believers. Some 15,000 young people also took part on social media by answering questions to help inform the October Synod 2018.

Pope Francis joined the meeting at start of the week and shared his hopes for the youth and their work by challenging them to have courage in their discussions throughout the week-long meeting. He listened to testimonies from representatives and answered questions.

The ‘youth document’ asks the Church hierarchy to ‘be a transparent, welcoming, honest, inviting, communicative, accessible, joyful and interactive community’.

Delegates noted many of their peers were leaving the Church in large numbers. ‘Young people who are disconnected from or who leave the Church do so after experiencing indifference, judgment and rejection,’ the document said.

The document challenges Church leaders to ‘speak in practical terms about subjects such as homosexuality and gender issues, about which young people are already freely discussing’.

Isabella said, ‘I hope we can continue to grow and strengthen this desire to support and listen to young people throughout the Church in New Zealand over the coming months as we journey towards the Synod of Bishops in October. Pope Francis wants the whole Church to engage with young people, listen and find new ways forward.’

The youth document is on the Vatican website at: tinyurl.com/Pre-Synodal-Youth-Document

Published in WelCom May 2018