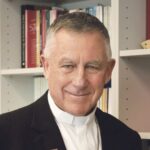 Kia tau te rangimarie ki a koutou. Last Saturday Pope Francis visited Assisi, where at the tomb of St Francis he signed his new Encyclical “Fratelli Tutti, on Fraternity and Social Friendship.” He signed it on the tomb of Francis of Assisi and then made it public in Rome 24 hours later. “Fratelli Tutti” means “Brothers All” – please do not let the title put you off. In using these words, the Pope was quoting St Francis of Assisi who used this term to address all women and men, all who are sisters and brothers.

It has already been suggested that this latest document of the Holy Father should be both read and prayed because it is “nothing less than a way to reread and to live the Gospel for our times”.

In 2013, only a few weeks after he had been elected, Pope Francis visited the island of Lampedusa in the Mediterranean where thousands of people had lost their lives as they tried to reach Europe searching for a new and better life. Thousands of people were drowned as small boats overturned and it seemed the world neither noticed nor cared. The Pope used the phrase “a culture of indifference.” This new Encyclical is something of the same. Fratelli tutti is not about making adjustments here and there to our personal and community lives. Rather it is very much about a way to reread and to live the Gospel for our times. The Pope writes about the need for us to survive not only the coronavirus pandemic, but the many other things our contemporary world needs to do to survive. It is that serious. It is that compelling. It is that demanding.

In this encyclical Pope Francis wants to offer “a new vision of fraternity and social friendship that will not remain on the level of words.” As we would say today, he wants us to “walk the walk,” not just “talk the talk.” It is a primer on the Catholic Christian way of viewing life and living life in dialogue among all people of good will.

This is an invitation for everyone to broaden our perspective to view a “world without borders” and to view every single person on the planet, and yes, the planet itself, as brother and sister. In particular, he pleads on behalf of the world’s poor on the margins of society, as well as the handicapped, the infirm and the elderly who often live on the margins but who ought to be at the centre.

The whole document is an unremitting invitation to a conversion of life which of course the Gospel is too. Fratelli tutti is a profound document. It can change minds and hearts. It can be one avenue to do nothing less than “renew the face of the earth.” Take and pray.

The post Fraternity and Social Friendship first appeared on Archdiocese of Wellington.

Royal Commission of Inquiry into Abuse

As you will be aware the Royal Commission of Inquiry is holding a public hearing from Nov 30 [..]