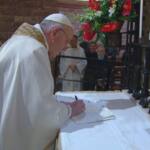 Pope Francis signed his new encyclical Fratelli Tutti on the tomb of St Francis of Assisi on the saint’s feast day, 4 October.

Pope Francis’s new encyclical Fratelli tutti is a call for everyone to view the world as without borders and view everyone as their brothers and sisters, says Archbishop of Wellington Cardinal John Dew.

“Fratelli tutti is a profound document,” says Cardinal Dew. “It can change minds and hearts. It can be one avenue to do nothing less than ‘renew the face of the Earth.’ Take and pray.”

Pope Francis signed Fratelli tutti at the weekend when he celebrated Mass at the tomb of St Francis of Assisi. It is the third encyclical of his pontificate and focuses on friendship and human solidarity at this time of international pandemic and polarisation. The title has been translated from the Latin as Brothers and Sisters All, a key phrase in the document.

Cardinal Dew, vice-president of the NZ Catholic Bishops Conference, says Fratelli tutti is not about making adjustments here and there to our personal and community lives.

“Rather it is very much about a way to re-read and to live the Gospel for our times. The Pope writes about the need for us to survive not only the coronavirus pandemic, but the many other things our contemporary world needs to do to survive. It is that serious. It is that compelling. It is that demanding.”

Fratelli tutti pleads on behalf of the world’s poor, the handicapped, the infirm and the elderly – people who often live on the margins of society but who ought to be at the centre.

“This is an invitation for everyone to broaden our perspective to view a world without borders and to view every single person on the planet, and yes, the planet itself, as brother and sister.”

Pope Francis wants to offer “a new vision of fraternity and social friendship that will not remain on the level of words,” says Cardinal Dew.

“As we would say today, he wants us to walk the walk, not just talk the talk. It is a primer on the Catholic Christian way of viewing life and living life in dialogue among all people of good will.”

Born immaculate, Mary is the highest honour of our race

Dec 8 is the Feast of the Immaculate Conception [..]

On mission and salvation

A presentation from Diocesan staff on our current situation [..]