I’ve made it to Dehra Dun.

Delhi airport is hugely improved since India hosted the Commonwealth Games. It still manages however to surprise. Recently India introduced online Visas which saves all the hassle of sending documentation to an Embassy. But there’s a catch. For online visas only, at arrival finger and thumb prints have to be taken. The recording equipment was “little bit not working Sir.” Anyhow, sanitizer gel seemed to do the trick and after ample demonstration from Customs staff, complete with special drying technique which resembled sign language for clapping, all proceeded smoothly.

Except that my main bag was missing. Boh, as the Italians say. (It’s the first time I’ve encountered that problem in many years of flying.) The Thai Airways lost bag form didn’t exactly inspire hope. To be circled was a line reading, Baggage arrived: Open, Closed, Damaged, Pilfered. Anyhow, to cut a long story short, two days later my bag was duly delivered, five hours road journey from Delhi, little bit pilfered, by two men in a tuk tuk (auto rickshaw) at 4.45 A.M!

“Your bag Sir” said the driver as I appeared out of the black, as if delivering a suitcase at that hour in the morning to a three line address in a nation of over one billion inhabitants was a perfectly normal occurrence. Maybe it is. India never ceases to amaze.

Anyhow, I’m not here as a travel writer.

A man called Bhola is always top of my visit list at Raphael (where I stay in Dehra Dun).

Bhola has very severe spasticity, and contractions of all his limbs. He is dependent on others for everything. Bhola was found when he was four years old abandoned on a track near the Dehra Dun railway station. Mercifully someone noticed him lying there helpless and brought him to Raphael. Here, he has been cared for ever since.

In one sense, being abandoned by family, he knows nothing about who he is, although he does recall being taken to a mosque by his father just before he was deserted so he presumes he is Muslim. But in countless other ways of course he knows exactly who is. His own personality shines forth and he is always ready to engage.

Like many with disabilities Bohla has compensatory skills. He will call out my name before he sees me. He recognizes footsteps.

Because of his severe condition speaking is very difficult. And comprehension for the hearer equally tough. But he never gives up wanting to communicate. As I try to fathom what he is saying, locking in the words I get right, communication slowly builds. He never diverges from what he wants to say nor settles for an approximation so a sentence can take ages to emerge. I’m reminded of the value of patience and determination and also how communication – of a request or thought or feeling- is so much more than the language itself. It triggers and nurtures a relationship. A treasure that Bhola holds fast. 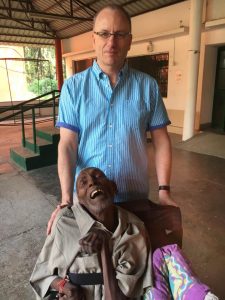